As everyone is aware, the 'Rona hit us rather harder than we thought.  Well, harder than some people thought, and nowhere near as hard as some people predicted.  I am almost 61 and have been controlling diabetes for a couple of years.  No illness yet.  We're blessed.

But... the crisis has passed from being a medical problem to a political opportunity.  Some folks, having tasted the power granted them under temporary conditions, have done and are continuing to do their best to make sure that our present 'pandemic state of emergency' will never end.  We've had an election 'fortified', a euphemism chosen by the victors to describe what folks in the old days would have called 'ballot stuffing'.  All under the cover of a 'crisis' of the virus.  But I don't care about any of that.

There have been no local gatherings of BattleTech players for over a year.  A lot of the folks playing the game have other things on their mind - such as gainful employment and making their payments on time, or at all.  I don't blame them.  The annual wargaming convention has been cancelled once, and will likely be cancelled again.

The current (and forever ongoing) insanity has affected my schedule as well.  I originally intended to have TRO: 3063 Updates (circa 3069) ready to go in April 2021.  I figured a year was enough time to get the art, writing and so on together in a timely manner.  After all, been down this road before.

But it's been one damn thing after another, even while CGL relentlessly 'updates' their product and pushes it and the available technology into the future of BT - I think 3145 was the last date I heard of, but I cannot be sure.  It is hard to remember that the Jihad, Devlin Stone and the Republic of the Sphere, and the Dark Age are all in the rearview mirror, and getting smaller each day.

These things were current and larger than life when I published the original TRO:3063.  However, from hanging around fan sites and reading posts, I gather that even today, many folks are playing in the eras of the past, and not the present.  Not sure why.  Clanners are the most vocal of the online faces I see, but I always thought of the Clans as the Klingons of the Inner Sphere.  They are meant to be level bosses, or the Ultimate Boss, of a video game.  You don't play the Klingons, unless you're OPFOR.

But folks have made fetishes of the Clans, despite any number of unreal 'facts' about them that clash with human behavior or even the little we know of how the human body works.  It's why a goodly amount of BT fiction, fan or professional, comes across as Mary Sue.  It's wish-fulfillment.

So I will STILL not deal with the Clans in 3063.  There is no shortage of fanboi Clanners - let THEM write their own TRO for that era.  It has been almost nine years since our work came out; anyone could have done something like it in that time.  One effort originally started in 4Chan looked good in 2014, posting some truly impressive progress over the years, but.... it's been seven years and the book's not finished.  It may never be finished.

People grow old, people change.  But I still have an abiding interest, if not love, for the game and a respect for the world-building that lies behind it.  I will move my Updates schedule to April of 2022, cross my fingers and clear the decks.

Thank you for stopping by.

Posted by Steven Satak at 7:58 PM No comments:

Welcome To the site!

Hi!  If you're new here, and looking to download the fan-made TRO: 3063 and associated books (Record Sheets, Alpha Strike cards, etc), please use the map on the right and go to September 2012.  The first entry will be your destination.  I have installed new links for your downloading ease.

This site has been through a few changes due to my various dreams.

I wanted to get a German language version out.  I spent money and time on that and though the second guy was willing to do it, Real Life intervened and I realized I just didn't have the chops to do it.  Throwing money at a late project doesn't save the timetable.  And there didn't seem to be a demand.

I stop in about once a quarter to my cloud storage and check the traffic specific to the download of the TRO.  I don't do this to feed my ego.  I do it to gauge the need for maintaining this place and the links.

So far it seems substantial, enough to justify keeping this blog open and the cloud storage paid up.  For the past eight years, you folks coming here have been able to download this TRO to your heart's content.

Enjoy your stay here.
Posted by Steven Satak at 8:50 AM 1 comment:

Alex is back from summer vacation and is working on the translation for the back cover, the inside headers, etc.

I daily await my InDesign Dummies book, as I am eager to brush up on my old skills.  It can't be very hard; it's just that I did a brain dump in 2013, never guessing I would need the skills five years later.

Can't find the original InDesign disk, either, so here's hoping I never get a corrupted program!

I am working hard at completing my paperwork for the shipyard, looking for temporary work while I wait, and so on.  The days are wide open, and I should have time for everything.  If the weather would just cool down a bit, I might get more done!

This is one of the things I do when I am not working on, or playing with, Battletech: 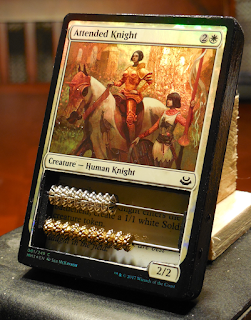 Life counters and Trackers for Magic, The Gathering.

Thanks for stopping by!

Another Try at a German Translation...

A translator by the name of Alexander Sosedow recently contacted me about continuing the German translation of TRO:3063.

Of course, I would like to see it completed.

So I sent him the pertinent files and we will peck away at the project, one entry at a time.

No telling when it will be completed.  End of the year would be great, but these things take time and according to Alex, there are at least 100,000 words to translate.

But!  He has the InDesign files and so it's up to him.  I will have to dig up my InDesign 3.0 for Dummies and re-learn how to drop text in and resize the pictures - stuff like that.

He's busy.  I am too, having recently lost my job at Trulife due to a reduction in force at the Poulsbo plant.  Lots of things to do - re-purpose my 401k, look for a job, work out in preparation for qualifying for a shipyard position, look for a job... like that.

Thanks for stopping by.

Steve
Posted by Steven Satak at 10:51 PM No comments:

Well, THAT Ship Has Sailed....

I tried and tried to get a German translation going with Andre Winter, but it was just one thing after another.

I am  going to be honest with you all: when I 'Friended' Andre Winter on FaceBook, I was immediately carpet-bombed by an endless string of hard Left propaganda defending the Islamic onslaught of Europe and celebrating, frankly, perversion. I did not agree with most of this, but felt it should not get in the way of the project.  But nevertheless, I had a feeling this was not going to turn out well.

Leftists as a rule do not believe they have to follow the rules of right conduct if they are dealing with anyone who disagrees with them.  In that, they share a lot with Islam.  I was nervous that Andre, having discovered from my indignant comments that I was of the 'Other', would simply decide I didn't deserve his valuable time - contract be damned.

I still don't know if that is what went on, and I will never know.  But personal problems of one kind after another - funerals, bipolar diagnosis, vacation, piss-poor communications, trouble with word selection, other more pressing work - kept pushing the actual performance of the translation back and back and back.  And that is when Andre Winter even bothered to respond to my emails and FB messages.

It's been nearly a year.  Here's how it went:  "The Lyran section will hit you next Monday".  Monday comes and goes, nothing.  Lather, rinse, repeat about a dozen times.

I finally got sick of the empty promises and asked for my money back today.  He won't give it back. I immediately received a flood of excuses (mind you, he's been dead silent for a month and a half).  I Unfriended him and blocked his messages.  First time I have ever done that to ANYONE.

So now I am out $300 and have nothing to show for it but a couple of translated pages and a worthless contract that Andre Winter violated at the beginning of February this year.  Oh, and a string of empty promises.

This guy has some serious problems.  One of them is that he's a damned liar.  I dunno - guess he figured I was just another fanboy.

If you need English-German translation done, I suggest you look elswhere.  Meanwhile, here is the contract: 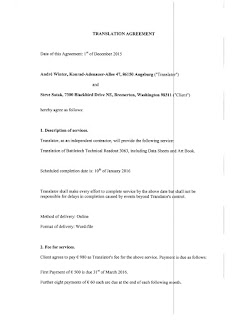 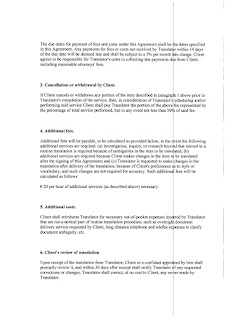 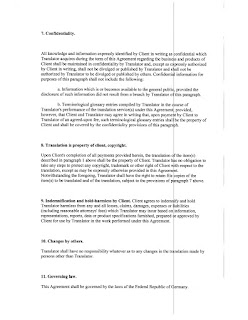 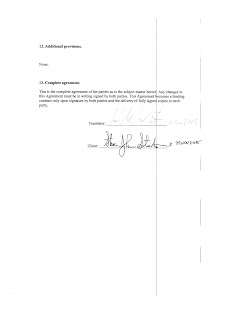 Thanks for stopping by.  Sorry to disappoint you all.

Well, I signed the contract sometime in November and sent some money off in February.

Still haven't seen a thing.  I have proofreaders who have been promised time and again by the translator that something was coming.

For a long time, nada.

Finally something showed up with Thomas and Nadja, the proofers, about the time I decided to pull the plug and ask for my money back.

So... I relented and we are all keeping in close touch on Facebook.

Draconis Combine is done, I think, and the Lyrans are next.  Slow going and there are issues of format (the German language often uses words that wind up not fitting in the same area as the original English text), but we should have something that works for German BattleTech fans soon.

Posted by Steven Satak at 9:40 PM No comments:

German Edition - I Can Get It, But I Need Help!

Last entry, I noted the slow (read: nonexistent) progress of the German translation of this fan-made Technical Readout.

I have since begun to speak in $$$ and things are changing.

My translator, who does such work for a living, has agreed to a sum I can *almost* manage.

In return, we have a full translation by the end of January.

Donate if you want to see it happen.  I have about a month to decide if there's going to be demand for it.  If there is, I will commit.   I need to gather at least US $850 - half the cost - before I can proceed.

This is a blog dedicated to keeping artists, authors and interested parties informed as to the progress on TRO:3063:Upgrades.
There is some experimental technology present - mostly variants of current weapons (HPPC, Light AutoCannon, targeting computers on vehicles). A 3069 Upgrades version of the original 3063 TRO is planned for April of 2021.
The writing is what I call 'between canon', meaning that, to the best of my ability, it does not contradict or alter canon writing by the Company but will deal with things the company has not addressed yet.
The format will be in the current TRO style. Our original publish date was September 2012.

Steven Satak
I'm married, with a wife who speaks Tagalog and a twenty-five-year-old son. I currently work a blue/white collar job doing QC for The Lighthouse For The Blind.